Throughout my career as an astrologer there have been numerous “Miracle” celestial events that promised the dawning of a new age or the beginning of something “BIG, BIG, BIG.” Alas, disappointment always followed when the New Age of world peace and love was not ushered in and our imprisonment in the world of complicated emotions, fears, doubts, and more, continued.

Merkaba in the Sky 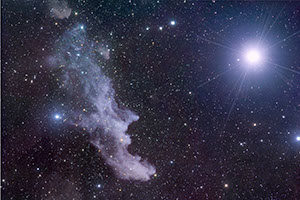 On July 29, 2013, there was an extraordinary configuration of planets and luminaries. This only happens every 800 years or so. And as expected every New Age mind on the planet is heralding it as the salvation of humankind. In other words, blowing it all out of proportion. The Grand Sextile, as it is called is, indeed a special one, but perhaps a cool-headed interpretation would be more useful than falling to our knees and shouting at the sky.

Throughout my career as an astrologer there have been numerous “Miracle” celestial events that promised the dawning of a new age or the beginning of something “BIG, BIG, BIG.” Alas, disappointment always followed when the New Age of world peace and love was not ushered in and our imprisonment in the world of complicated emotions, fears, doubts, and more, continued. Plus, the Young and Baby souls of the earth kept going with their headlong drive toward short-sighted destruction of the planet. 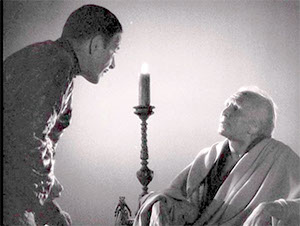 I know it would be wonderful if a singular event would zap everyone in the third eye and awaken the human race to peace and Shangri La. It probably won’t happen that way, but it does make good copy for the web and books. Remember the Harmonic Concordance in 2003? It had a similar configuration of planets as the one now.

Yes, I know now we are saying that we knew all along that this wasn’t going to be miraculous but merely the beginning of an open portal toward our goal. At the time, though, there was much hype about an ascension-like event.

Something similar also happened in 5 BCE. Some Christians claim that the alignment was the true Star of Bethlehem.

Although the Harmonic Concordance did not cause great and wonderful sweeping changes, it did work on our global consciousness. This is what these astrological events do. They work on our inner consciousness according to how our individual charts interact with the celestial placements. It is up to us to act on these forces. Many can and do simply ignore them. 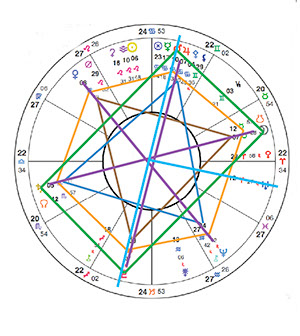 The latest in our grasp for hope of a better world is the double Grand Sextile that happened on July 29, 2013 and will affect us for a few years to come.

This configuration looks like the Star of David overlaid with sextile a star, and a rectangle. the Star of David is sometimes called the Seal of Solomon. In 3-D, it is a Merkeba or two pyramids overlapping their bases. The Seal of Solomon, Star of David and Merkeba have been symbols in spiritual circles for centuries. In India this pattern is the Satkana Yantra that symbolizes the coming together of the masculine and feminine archetypes of Siva and Shakti. Feminine is water (spirit) and masculine is earth (material). The grand trines in this celestial placement are in both water and earth. 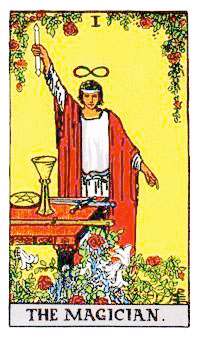 The Satkana Yantra is a symbol of Tantric Unity. As for Solomon, he was supposedly given this symbol on a ring to perform magical ritual.

How does this grand configuration of planets and luminaries affect us now? It differs according to our personal astrological chart. In general it fosters openness to greater spiritual awareness. It is related the the heart chakra. There are dual forces in the configuration, bringing the higher consciousness into the material realm. 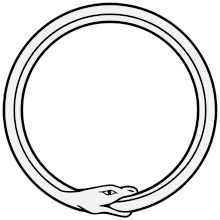 Other symbols of this card’s message of cosmic/earth unification are: His inner robe is white for purity and spirit. His outer robe is red for the physical world and passion. There are roses (red) and lilies (white) echoing the theme of the robe. On the table are the symbols of the four Tarot suits: Swords (air), Pentacles (earth), Cups (water), and Wands (fire). All elements come together on the table. Over his head is a lemniscate (figure eight on its side) symbolizing the eternal cycles of the universe.

The planets and luminaries on July 29 show a complex pattern of forces for us to respond to. 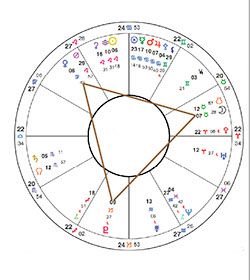 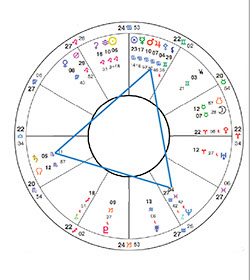 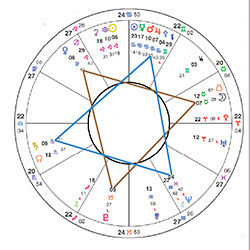 Earth and Water: Seal of Solomon

There is a Grand Sextile: 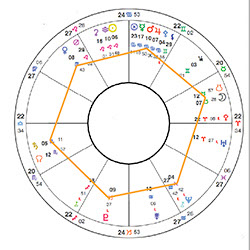 The Grand Sextile is activated through oppositions:

Saturn is opposite the Moon

Venus is opposite Neptune and Chiron. Although, the opposition with Chiron is weak.

Pluto is opposite Mars and Jupiter 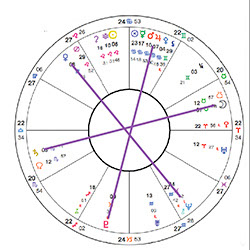 This configuration also forms a rectangle: 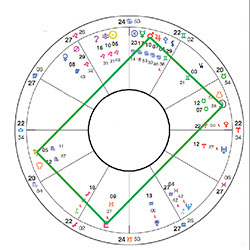 Then there is the T-Square: 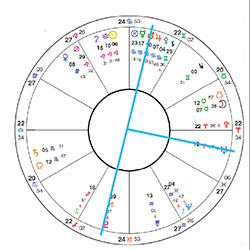 If you have any of these placements in your personal chart, this complex pattern of planets and luminaries will impact your life. How it does this depends on the details in your chart, how aware you are of the subtle energies around you, and how willing you are to face your truth and go for change.

Oppositions are opposing forces that urge us look for compromise. This often leads to greater wisdom and awareness.

T-Squares add a third conflict to the opposition that requires hands-on work to resolve and integrate opposing forces. The stem of the T shows our best avenue for utilizing the energies offered.

The rectangle puts pressure on us to face ourselves truthfully and honestly to resolve our issues without violence.

This can work on a personal or global level, depending on the individual astrological charts. Some of us will have amazing experiences and growth. Others will hardly notice it.

This is an opportunity to let go of the darkness or karmic blocks within us. We must examine any feelings of being victimized or tendencies to beat ourselves up emotionally. This is great time for healing and being attuned to healing modalities such as Reiki or Re Hu Tek. 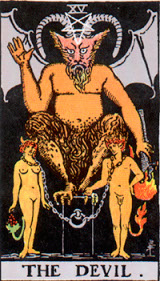 The Tarot Card that represents what we must do to activate this energy comes through the Devil Card. A beast sits on a black rectangle. Two people—a woman and a man—are chained to the rectangle.

The beast represents the darkness, repressed emotions, karma, fears, doubts, and anything we hold onto that is not for our highest good. The inverted pentegram on its head represents our ignorance of our power and light.

As Jacob Marley said to Ebenezer Scrooge. “I wear the chain I forged in life! I made it link by link and yard by yard! I gartered it on of my own free will and by my own free will, I wore it!”

The good news message is that the chains around the necks of the two people in the card are loose. They just have to realize that they can lift them off, let go and be free. It’s easier than we think, especially now, to work on ourselves.

So, I encourage you to meditate, study, find help through trustworthy intuitives and teachers who can help you walk the path of the opportunity offered us by this Grand configuration. Have your personal chart done to find out how you can best use the gift offered by the stars.

For information on having your personal chart done, go to: metastudies.com/store

For information on learning astrology from Anita Burns via home study go to: